When cruising north of Desolation Sound, travels are not complete without dropping the hook at Octopus Island Provincial Marine Park in Okisollo Channel. Located on the northeast corner of Quadra Island, this group of small islands not only provides a safe anchorage but is considered one of the most beautiful gunkholes in the Discovery Islands. 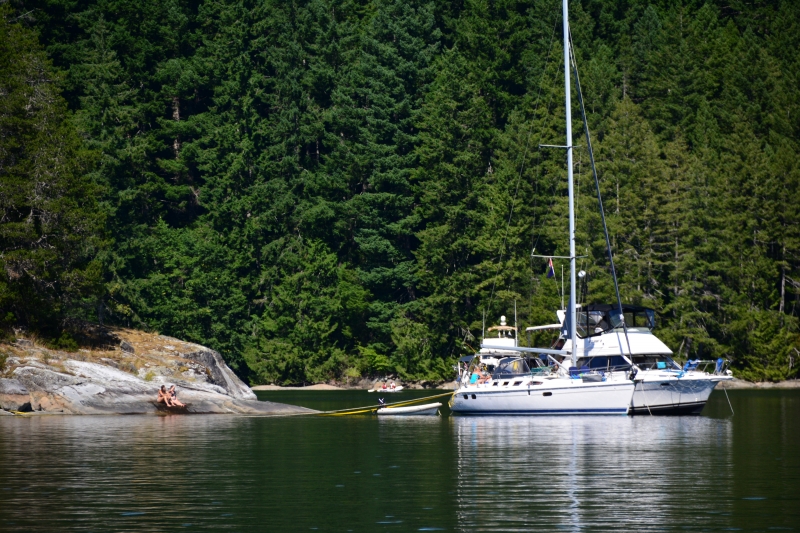 Octopus Island Provincial Marine Park – During the peak of the season stern-tied boats will line the shore.

Part of the adventure is getting there. To reach the park, boaters must transit tidal rapids no matter which way they approach. Approaching from the Strait of Georgia they will transit Surge Narrows. Coming from northwest through Johnstone Strait and Discovery Passage the course is through Upper and Lower Rapids of Okisollo Channel. The third approach is from the east via the Hole In The Wall, and then a short passage south to Bodega Anchorage and through the kelp lined narrow passage between Quadra Island and 50-meter Island. Some cruising guides refer to the passage as Tentacle Passage. The depth is adequate but can get tight if there is oncoming traffic, so skippers need to take caution and keep a keen lookout.

Passage into the Octopus Islands and Waiatt Bay anchorages is also possible from the south between 55 and 71-meter Islands. Extreme caution should be taken because the entrance is riddled with rocks and kelp. More than one skipper has left their mark. 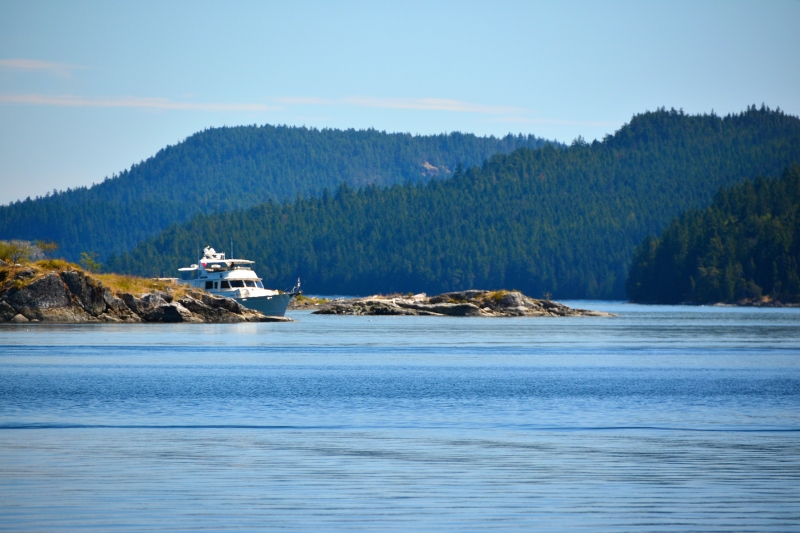 Octopus Island – Caution should be exercised when entering the park from the south.

The Octopus Island Provincial Marine Park is a group of about a dozen islands and islets that form many bays and nooks providing well-sheltered anchorage over a good holding bottom but watch your chart – the area within the islands is peppered with hazards.

Waiatt Bay offers hazard-free anchorage throughout, with a depth of about 30 to 50-feet, though westerlies might make it uncomfortable.

If you visit the area in the early or late season, the anchorage will most likely be empty. During the peak of the season the small bays will be lined with stern-tied boats.

What visitors enjoy most about the area is the sense of isolation and the plentiful seafood and wildlife on offer. There are eagles, deer, raccoons, seals, herons as well as clams, crabs, oysters, shrimp, and prawns.

During the day you can launch your dingy or kayak and navigate closer to shore. Also, at the head of the Waiatt Bay there is a trail that leads you through the forest to beautiful Small Inlet. Quadra Island has a narrow isthmus at this point and the one-mile hike can be completed in about 20-minutes. From here there is another trail that will take you up the hill to Newton Lake (elevation 394-feet) where visiting boaters can enjoy a freshwater swim.