There is an old saying: “It’s not where you’re going, it’s how you get there.” With the speed and accuracy of today’s chart plotters, it seems like the “how” part of boating has never been easier.

While reading nautical charts on today’s navigational technology makes the planning of your route easier, to be a good skipper, you nonetheless need to know the basics of how to read a chart. Let’s look at the types of charts, some of the basic symbols, and numbers on charts and what they all mean. 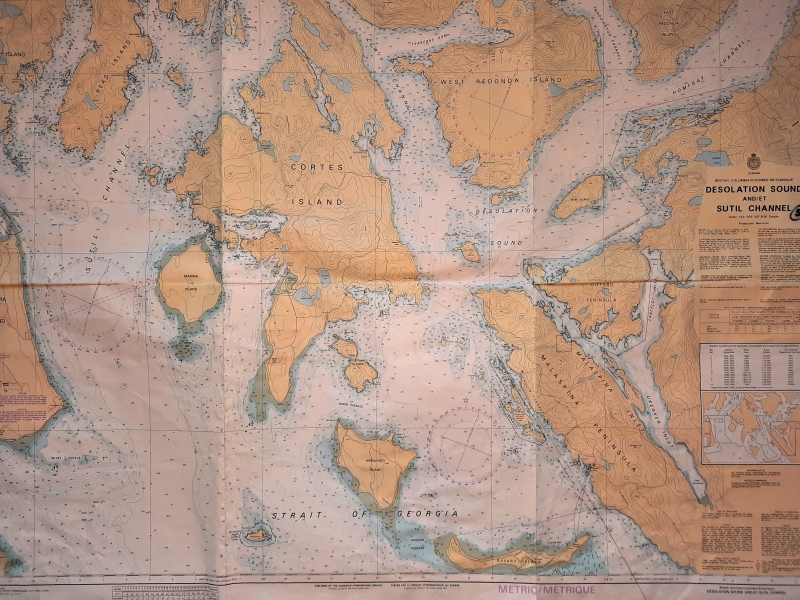 There are three types of charts available. The first is the paper charts published and updated by the Canadian Hydrographic Service. They are available for purchase at chart agents, nautical bookstores, and chandleries.

Electronic charts come in two styles – Raster and Vector. They appear quite different but do provide the same data. Which you prefer is up to you and what you’re used to, but neither is intrinsically better.

Instead of storing charts as images, Vector charts store chart data in digital format in a database. They are digitally layered so they can be customized to the user’s preferences. The chart plotter interprets this data to display a visual representation of a chart.

Perhaps the easiest thing to identify and misuse on every paper chart is the compass rose. It will typically display with an outer and inner ring. The outer ring will have a star at the top indicating true north, which is geographic north. However, the inner circle indicates magnetic north, the direction to the magnetic pole. The direction your electronic nav unit indicates is compass north, which is based on computing for local magnetic variation and the boat’s heading. (Aren’t you glad you no longer must do this manually?) The direction that your boat’s compass – which every boat should have – points is not the same because offsets for deviation (affected by heading) and variation (affected by location) need to be manually accounted for. On the chart, magnetic north will have a small arrow pointing slightly off-kilter to the star that indicates true north with the variance located on the arrow shaft.

On your charts, you’ll see numbers aligned along a contour line that indicate the depth. It is important to know whether those numbers are measured in fathoms (1 fathom equals 6 feet), metre or feet, but that will be noted on the chart. In coastal waters, these depths measurements are for the tidal datum. The chart datum is either Lowest Normal Tides, or Lower Low Water Large Tide. In coastal and shoreline areas, some of the numbers might have an asterisk or circles around them. These indicate rocks or other possible submerged hazards.

All fixed raster charts are drawn according to scale. Coastal charts are typically produced in a 1-to-20,000 to 1-to-80,000 scale to show more detail. Large scale, large detail, that’s the effortless way to remember the difference between small scale and large-scale charts. A small-scale chart shows a large part of the earth’s surface, but in small detail. Conversely, a large-scale chart shows smaller part of the earth’s surface, but of course in greater detail. Yes, it’s counter intuitive and confusing, but that’s the way it is.

Coastal and offshore charts use nautical miles. A nautical mile is equal to one minute of latitude, which simplifies navigation computations. For comparison, 1 nautical mile equals 1.151 statute miles, or 1.609 kilometers.

A complete list of chart navigation aids can be found in the Canadian Coast Guard Publication The Canadian Aids to Navigation System, available for purchase at chart agents, nautical bookstores, and chandleries. Here is another related helpful link

The above information regarding reading nautical charts is brief, but a good starting point to help you navigate better while out on the water!