Those of us who live in the northern latitudes rely on antifreeze to protect our boat’s engines, and generators with closed cooling systems, hydronic heating systems, onboard sanitation, and potable water systems. As widely used as antifreeze is it’s one of the least understood tools we use, mainly because the widely accepted standard used to establish its rating can be dangerously misleading. 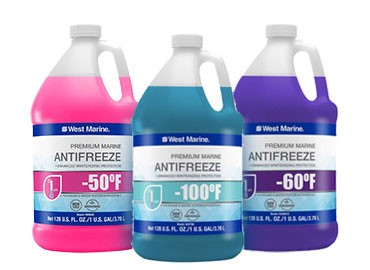 Antifreeze used in an engine’s coolant system serves many purposes. The most important is keeping the coolant in your engine from freezing during cold temps. It also keeps that same fluid from boiling over during the summer by elevating the boiling point of the fluid. Systems are normally filled with a 50/50 mixture of antifreeze and water. Other functions of antifreeze are lubrication and corrosion inhibitor.

There are two types of antifreeze in general. Ethylene glycol is recommended by many engine manufactures for use in closed cooling systems, but it’s quite toxic, so precautions must be taken to use and dispose of it carefully. It has a yellow-green color and tastes sweet, making it attractive to children and pets if stored improperly or spilled on the ground. Propylene glycol (pink in color) is used to protect boat and RV pumping systems and is advertised as nontoxic and environmentally friendly, but it still should be thoroughly flushed from potable water systems before they are used.

The common ready-to-use antifreeze available on the market for potable water systems is contains about 30 percent propylene glycol and is rated to provide protection to -50 degrees Fahrenheit, equivalent to -45.5 degrees Celsius. The balance of the solution is mainly water with additives to lubricate pumps and seals, and algae inhibitor.

Many skippers assume the rating means -50 degrees antifreeze will remain in a liquid state until its temperature reaches 50 below zero, but that is far from reality. The slush point, where ice crystals begin to form in the solution, is around 12 degrees Fahrenheit (-11 degrees Celsius), more than 60 degrees Fahrenheit (15.5 degrees Celsius) above its nominal rating. At that point, damage is not imminent, but as the temperature of the solution drops, more dense crystals begin to form, expanding to exert increasing pressure on the wall of the pipe, water channel or container until it reaches it burst point. In accordance with standard rating system, means that the antifreeze will not cause a copper pipe to burst until it reaches that temperature. It’s important to recognize that the -50 rating indicates the temperature at which the product can fail to protect. Unfortunately, when the same solution is used to protect a system with PVC pipe or fittings it can cause the plastic to burst at -10 degrees Fahrenheit (-23 degrees Celsius). A plastic reservoir would fail even sooner.

A much more accurate way to determine what level of protection to use is to ignore the burst rating and match the slush point of the antifreeze to the lowest temperatures that may be encountered. This provides a margin for error and will help to ensure that the antifreeze solution will never get beyond the initial crystallization stage, so no potentially damaging pressures will be created. The slush or freezing point may not be prominently marked on the product label, but most manufactures publish charts showing both the burst and slush points of their products.